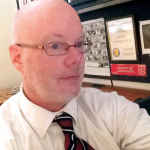 David Hunt is a former print and broadcast journalist who covered politics, the environment and health care, including the early years of the AIDS epidemic. His documentary revealing high levels of pollutants in the waters of Marina del Rey, Calif., earned him a 1987 Los Angeles Area Emmy Award.

Hunt produced some of the first educational videos on AIDS treatment and prevention, including an award-winning video for parents of children with HIV/AIDS, distributed worldwide by AIMS Media. He spearheaded a public health campaign promoting ocean ecology in Southern California and shot a music video featuring the Surf Punks. His work to reunite and honor a group of Vietnam veterans three decades after the war was highlighted on ABC-TV’s 20/20.